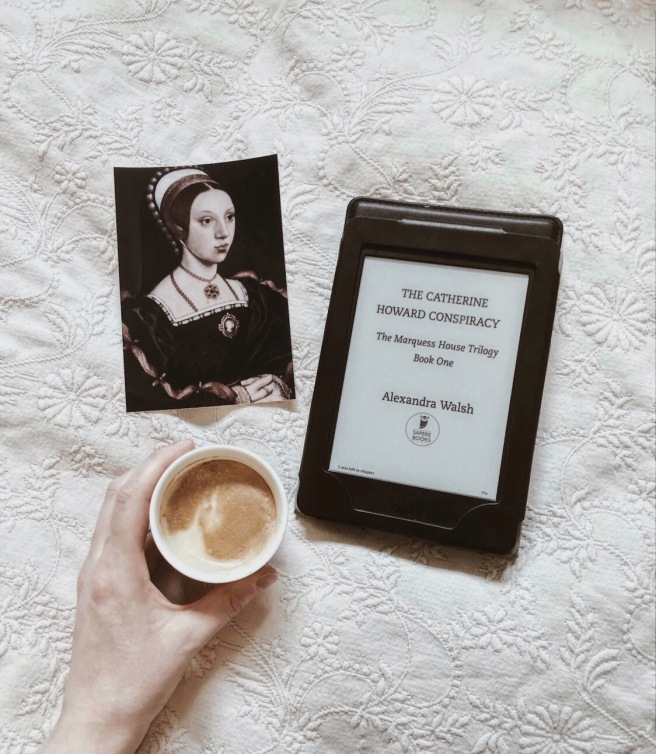 When Catherine Howard arrives at the court of King Henry VIII to be a maid of honour in the household of the new queen, Anne of Cleves, she has no idea of the fate that awaits her.

Catching the king’s fancy, she finds herself caught up in her uncle’s ambition to get a Howard heir to the throne.

Terrified by the ageing king after the fate that befell her cousin, Anne Boleyn, Catherine begins to fear for her life…

Mary inexplicably cut all contact with Perdita and her twin sister, Piper, but she has left them Marquess House, her vast estate in Pembrokeshire.

Perdita sets out to unravel their grandmother’s motives for abandoning them, and is drawn into the mystery of an ancient document in the archives of Marquess House, a collection of letters and diaries claiming the records of Catherine Howard’s execution were falsified…

What truths are hiding in Marquess House? What really happened to Catherine Howard?

And how was Perdita’s grandmother connected to it all?

This is Alexandra Walsh’s first book in her Marquess House trilogy.

As the plot summary suggests, the story takes place in two different time periods: the 16th Century and in the present.
In the past it has been quite common for historical fiction authors, and even historians, to portray Catherine Howard as a naive and frivolous good-time girl. Walsh goes against the traditional stereotypes of Catherine by writing her as a brave, compassionate and intelligent young woman who is more than able to discuss politics as well as write and decipher coded messages. In this novel, Catherine is quite religious and “[prays] to her saints and [asks] for help to do what [is] righteous and good” and we are informed that Catherine is “not equipped to seduce a man as experienced as the king”. In fact, the story rejects any possibility of intimacies she may have had with Henry Mano and Francis Dereham and implies that Catherine “had never seen a grown man naked before Henry”.
These more positive features of Catherine Howard that are used to actuate sympathy from readers are, regrettably, written at the cost of other historical figures’ reputation and historical accuracy. Considering the vital part Henry plays in Catherine’s known life, there is very limited dialogue including Henry and most of what we get to know about him is through a third person perspective. Henry’s known negative stereotypes are reinforced in an exaggerated manner, but in this novel he is described to as a “corpulent and terrifying tyrant” and “madman”, who is also a “pus-filled monster”. We are led into incredibly graphic descriptions of Henry for which there should be a trigger warning for readers who have suffered any kind of sexual abuse. Henry first notices Catherine Howard as she is teaching Queen Anne of Cleves how to dance. As the dance reaches “crescendo”, so does the king. This is proof enough for Henry that he is not impotent. However, to release his sexual frustration of seeing Catherine dance, Henry orders Thomas Culpepper to “send for a whore” that looks like Catherine and who is “small, but not a child”. Henry ends up raping and beating the prostitute to death and this apparently puts a blemish to Catherine’s conscience. Henry transfers this abuse into his marriage with Catherine Howard. When Catherine informs him that she is with child, Henry doubts that the child is his and calls Catherine a whore while lashing a whip against her face and breasts. These events cause Catherine to miscarry and often lead her near death than life. Despite the brutality of the scenes with Henry, they fail to be convincing and rather create a shallow two-dimensional version of Henry. He has no redeeming qualities and we do not get the chance to dig deeper into Henry’s mind. Readers are clearly supposed to loathe him and sympathize with Catherine. A big part of the novel dwells upon Catherine as a compassionate, sobbing, “angel” who needs to escape from her abusive husband so that she doesn’t end up being another of his murdered victims.
Catherine’s saint-like qualities are further contrasted through other historical figures, such as Katherine Tilney, Joan Bulmer, Mary Lascelles and Francis Dereham; all who historically played a vital part in both, or either, Catherine’s past within the Dowager Duchess’s household and in her downfall. It is interesting that Walsh, in her obvious attempt at a feminist reinterpretation of Catherine Howard’s story, decides to label other women, such as Tilney and Bulmer, as “ridiculous, empty-headed fools”. So, it’s not okay that Catherine has in the past been labeled as “empty-headed” by historians such as Alison Weir, but it is okay that other historical women are labeled so? What is the purpose of trying to restore a historical figure’s reputation if another historical figure’s reputation is ruined instead?
In this version of Catherine Howard’s story Dereham, Bulmer and Tilney are the villains. Tilney has an extramarital affair with Henry in an attempt to take Catherine’s place as queen. However, Tilney is accused of treason for “fornicating with other men while she was the king’s concubine” and is suspected of being “in league with the devil”. One of the men she is to have fornicated with is Francis Dereham. Indeed, the conspiracy theory of the book states that Tilney, Dereham and Bulmer were executed, but not Catherine Howard and Jane Boleyn. The argument is that both Catherine Howard and Katherine Tilney’s names, as well as Jane Boleyn and Joan Bulmer’s names, have “the same number of letter”. *Mindblown* Of course, to emphasize the goodness of Catherine, she risks her life to try to save her adversary “trio” from the executioner’s block without any other logical reason than that “she would not have wished this on her or anyone”. The virtuous Catherine promises herself that she will “try to do a good deed, as a small way to compensate for the fear and brutality her husband spread”.
Where does Thomas Culpepper fit in this theory/story? Well, Culpepper married Jane Boleyn and then dies a hero for saving Catherine from further beating from Henry at one point. Jane Boleyn nurses him til death do them part.
I found the present chapters lengthy and repetitive. The present time parts of the novel feature Perdita and her friend Kit finding the “truth” about Catherine Howard’s story. That is, that she was never executed and was innocent all along. Perdita finds out that she and her twin sister, Piper (whose existence adds nothing to the story) are in danger if they allow their deceased feminist grandmother’s theories and historical truths see the daylight. After all, there is a secret organization willing to murder them if they dare challenge “the accepted version of history”. *chills*.

I had high hopes for Walsh’s novel. It is evident that Walsh has a talent for writing and at first I enjoyed reading her novel. However, the farther I got into the novel, the more bored and frustrated I got. Every time I thought things couldn’t get more surreal or absurd I was proved wrong and Catherine Howard turns out to be a mermaid in a myth.
I am always ready to welcome a more sympathetic portrayal of Catherine Howard, but in my personal opinion, Walsh’s sincere attempt to reanimate a credible and likeable version of Catherine was not a success. I believe we have a problem if we have to change historical facts concerning Catherine’s life to be able to sympathize with her. I do not believe she, or anyone for that matter, had to have been a saint to deserve sympathy for their tragic ends on the block. I can definitely appreciate a proto-feministic novel, but I don’t believe we are doing humanity any more favors by portraying all male figures as murderous rapists. It often feels as if Tudor fiction authors forget that a big number of their readers include people who are quite well-informed about Tudor history and who value historical accuracy as long as is can be attained. Readers that are longing for more nuanced and three-dimensional portrayals of historical figures who were real human beings. I am quite forgiving when it comes to historical inaccuracies since I always do my history homework, but I am fatally distracted by artistic license within a historical context when its purpose, to me, “makes no sense”.

Anyhow, there is a lesson to be learned from “The Catherine Howard Conspiracy”:

“There is always hope and mermaids.”

Have you read this novel? If so, I’d love to hear what you think the comments below.

Hello! I’m Sahara!
Needless to say, I love the Tudors and I love books. Combining my two loves and sharing is caring.
Looking for a royal read?
Pour yourself a cuppa and read some reviews. ♨︎